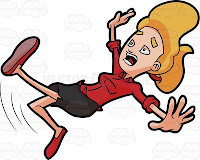 When I woke up today morning, the weather forecast said there would some heavy rains and some ice. I quickly ignored the warnings and started to get my fresh cup of coffee to kick-start my morning. It was my son’s playschool day. Because he only goes for three days, I usually try not to miss any of them, unless there is a heavy snow storm that I can’t pass.

Today, my morning began with a series of erroneous combinations. First, my husband announced that he had early meetings so he would be out of the door soon and would also take the car. He asked if I would consider keeping my son at home, given the weather? I shook my head incessantly, as I eyed my son waking up from his deep slumber.

My son and I stared at each other, knowing well that we both loved the space we got from being apart for short periods of time. So, yes, rain or no rain, we were sticking to our plans.

You have to look out for the ice, said my husband. I nodded, not really listening to it. What ice? I thought, I have seen rains in India and I know it can’t be that bad.

After my husband left, I convinced my son to step inside the shower after a ten-minute pep talk. It took another thirty minutes to convince him to step out of the shower and eat breakfast and get him to wear his clothes. Phew, by now, I really just need another cup of coffee.

My ordeal doesn’t end here. I now load my son with double layered clothes and heap him up with a jacket, gloves, a hat, socks and shoes. There, now my son looks like a mini-eskimo.

I do the same for myself, a jacket, gloves and hat. Clutching an umbrella, a tiny schoolbag and a bloated toddler, we tumble outside the door just in time to see my Uber driver parked right across the street. Wow, I thought. Today is my lucky day. Rarely does a driver turn up in sight without asking for further instructions.

Now, the rain is falling very hard and I am just focusing on how not to get drenched. First, I pick my son and buckle him in the car seat. I shut the door and turn around to reach the other side of the car.
But I don’t make it, not immediately at least. I take a couple of steps and find myself skiing on a thin layer of ice that covered most of the road. Bam! I landed on my bottom which is what I call, a nasty fall. I have never fallen like that ever before.

Within seconds, I pick myself to check if I have broken bones. I am glad there are none. After I return home, I have forgotten all about the fall because the pain has disappeared. Phew, that was close, I thought to myself.

I was so wrong. A few hours later, the aches began. For the rest of the day, I could hardly move. In addition, common cold gave me a visit. So, here I am, perched on the bed, wondering if my day could get any bad than it already is. But I remind myself to look for sunshine, which is a long way to go. For now, I have to make do with snow, ice, rain and a whole lot of cloudy days. Long way to go for sunshine. miss you, summer.

Popular posts from this blog

August 19, 2016
It’s been a little over 24 months (counting the pregnancy days as well) since I had a night out, meaning a late night dinner, or a movie night or just a get-together post dinner. A million things change once a baby comes into a couple’s life. In fact, nothing is ever the same. Though I haven’t really found the time (a mom’s clock is now monitored by her baby) to actually ponder over such things, there are these quiet moments of ‘just me and my athletic mind’ in which I sit down and fret over the things that I miss. But I don’t really fuss for too long, because there is always “someone” who needs you almost 24/7 and I have to practically pull myself together every single day to cater to the needs of this little tiny human being who is now the center of my world.
Anyway, it so happened that this little human whom I shall call “anklebiter(AB)” because he really bites through anything these days ( his favorite, though, are humans). So, AB must have sensed that I was probably missing on a …
Post a Comment
Read more

April 30, 2019
I haven’t been blogging much these days and that’s because new changes are taking place inside of my body. Well, growing a human being means a lot of things because everyday is new and different. Very often, you find yourself tracing back to the time of the first pregnancy and find that things are so much different because of the way you look at the days.


Of course, I ask myself quite often when I look at my active 4-year-old jumping up and down on the couch, screaming on the top of his lungs as to why I would want to add more noise and madness to my life by bringing another little human? I trace back my memory to the moment when just a few months ago I had started longing for the touch of a baby. Instead of simply watching some baby videos on YouTube or cooing over a friend’s baby, I decided to have one of my own. Pinch me!
Or perhaps, I am so used to the madness that a child brings along that I simply decided to add more of it into my life. Because hey, who wants a life where you …
2 comments
Read more

August 19, 2019
As moms, I think it’s very important to find ways to de-stress ourselves as we do repetitive things day and night to show our children why it’s important to cultivate good habits. As much as we do the same things with the goal of raising good humans, it’s sometimes boring. Yes, that’s the tiny little truth not everybody will admit too.
Motherhood, as much as it’s exciting, can be boring and monotonous. But the good news is that the boring plus the good parts don’t last forever as children grow out of each phase. Tada! Before we know it, the kids are tall and big, as we wonder what happened to the tiny humans we created not so long ago.
Anyway, coming back to the topic, I recently got hooked to a Canadian series on Netflix which is titled ‘Workin’ Moms’ which is about four working mothers who balance their personal and professional lives. It’s about mothers who love their children but also love their jobs, it’s about mothers who sometimes don’t want to have sex because they simply a…
Post a Comment
Read more

About Me, The Writer

chital_phenomenal
Hi guys out there! Well, stories have been my first love because they make life. We all have stories to talk about, stories untold, stories locked in our hearts. I have been writing stories ever since they influenced me. Here I am with three fiction novels in my kitty. If you have a story you want to talk about, you can always write to me. Here you'll find my blog posts too which are sometimes funny and stupid because I choose to write what prevails within me. About me on a personal note: I love to write at any time. Some day, I want to be the person who creates a tiny difference in the book world. Apart from that, I do have common interests just like anybody else with an extra tint of passion for books. You can always write to me here chitalmehta1987@gmail.com or check my website here - www.chitalmehta.com